This past week, government officials and media outlets have been reporting that beginning Sunday 7/14/19, Immigration and Customs Enforcement (“ICE”) will be sending deportation agents to 2,000 immigrants that have been issued deportation orders in major cities throughout the United States, including New York City. Advanced notice of such crackdowns is unusual and undermines their effectiveness because the targeted individuals make themselves more difficult to locate. As such, the raids appear to be designed to instill fear in immigrant communities to deter the record number of Central Americans seeking asylum on our southwest border. If you want to check whether a removal order has been issued against you, you can call the Immigration Court Information System's automated number at 1-800-898-7180.

Many of New York's top government officials have issued statements opposing the ICE raids, including the Attorney General  the Governor, and the New York City Mayor. Governor Andrew Como said “The Trump Administration's impending blitz of ICE raids across the country, including here in New York, is shameful and wholly unacceptable, and we will fight back at every turn to protect our immigrant families. As I've said before, if there is a move to deport immigrants then I say start with me — a son of immigrants.” In response to the anticipated ICE raids, the Governor has requested the State Liberty Defense Program's Rapid Response team to be on alert. If you are impacted by these raids, you can contact the Liberty Defense Team at 1-800-566-7636 or [email protected]. 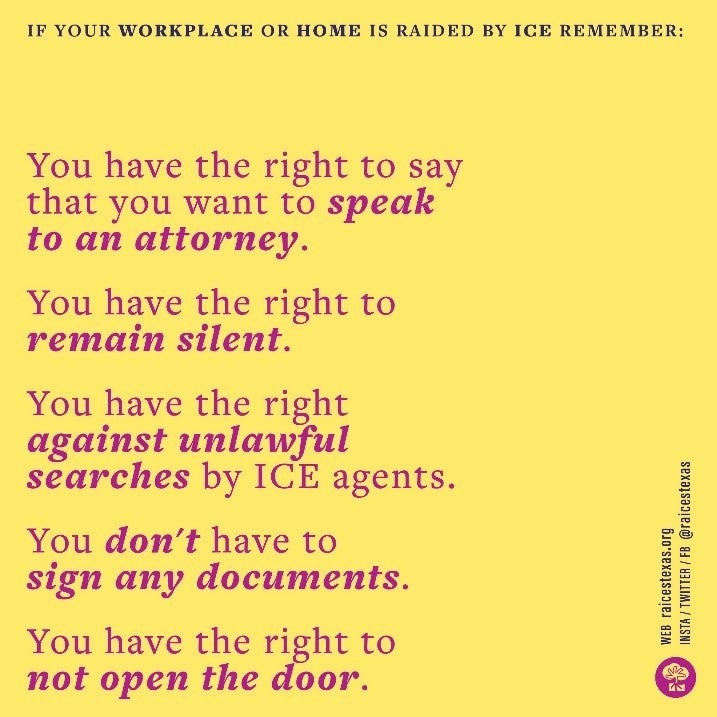 ICE agents do not have an unfettered right to enter your home, search or arrest you. In order to enter your home, they must have a valid warrant signed by a judge. You have the right to insist on seeing the warrant before you open the door. You should never agree to allow an ICE agent to enter your home. They may, however, forcefully enter. If they do, stay calm and clearly state that you do not agree with them being in your home and that you want them to leave. These statements may help in a later immigration proceeding. If you stopped in the street, you should ask the agents to identify themselves and provide their badge number. Then ask if you are free to leave. If they say yes, you should leave and say nothing. If they say no, do not resist. Do not agree to allow them to search your belongings. Do not say anything, other than you do not want to speak with them without a lawyer. You have a right to remain silent and a right to a lawyer, even if you don't already have a lawyer. Do not attempt to interfere with an arrest as it could escalate the situation and lead to someone getting hurt. If a family member or friend is arrested, you should be able to locate them at this website, but it may take a day for their information to appear. A collaboration of immigrant advocacy groups has created an easy to understand video series explaining these rights, which you can watch here. In addition, the American Civil Liberties Union's website has a section devoted to understanding your rights if you encounter ICE agents.